To view the overview of the programme schedule, please click on the image below: 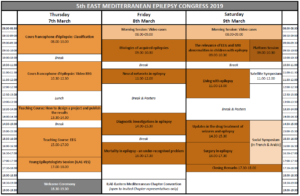 For details of the congress programme, please click here.

Two further Teaching Courses will be held in French:

A Platform Session comprising abstracts that stood out for scientific quality takes place on Saturday morning.

A Social Symposium, in French and Arabic, will take place on Saturday.

Autoimmune encephalitis – what do we need to know? –  Banu Anlar (Turkey)

Mortality in epilepsy – an under-recognised problem

Mortality in epilepsy and the role of SUDEP –  Torbjörn Tomson (Sweden)

SUDEP – how to communicate to patients and families, and when –  Raidah Al-Baradie (KSA)

The relevance of EEG and MRI abnormalities in children with epilepsy

Interictal spikes: When do you need to treat? –  Fatma Kamoun (Tunisia)

Updates in the drug treatment of seizures and epilepsy

Why should I pursue a career in epileptology?  – Samuel Wiebe (Canada)

ILAE Young Epilepsy Section: what is it and why should you join?  – Reem Alyoubi (KSA)

Teaching Course: How to design a project and publish the results

The 5th East Mediterranean Epilepsy Congress, Marrakech, Morocco, 07/03/2019-09/03/2019 has been accredited by the European Accreditation Council for Continuing Medical Education (EACCME®) with 19 European CME credits (ECMEC®s). Each medical specialist should claim only those hours of credit that he/she actually spent in the educational activity.
Through an agreement between the Union Européenne des Médecins Spécialistes and the American Medical Association, physicians may convert EACCME® credits to an equivalent number of AMA PRA Category 1 CreditsTM. Information on the process to convert EACCME® credit to AMA credit can be found at www.ama-assn.org/education/earn-credit-participation-international-activities.
Live educational activities, occurring outside of Canada, recognised by the UEMS-EACCME® for ECMEC®s are deemed to be Accredited Group Learning Activities (Section 1) as defined by the Maintenance of Certification Program of the Royal College of Physicians and Surgeons of Canada.